We are at the end of the five books of the Torah, yet as we all know, the whole Torah is ALL the Bible from Genesis to Revelation, yet this was the beginning of Adonai’s speaking his words to be written down by his chosen Prophets, in this case, Moshe (Moses). The word "Torah" means "instruction.' So the whole Bible is "instruction" from God.

In Chapter 33, Moshe blesses all the 12 tribes of Israel. Very interesting are the words in verse 7: “And this of Y’hudah, and he said, “Hear YHVH, the voice of Y’hudah and bring him to his people, His hands shall fight for him, and you be a help against his enemies.”

The sacred name of Adonai is used here, as in all places where the name LORD is used, yet it is also in the name “Y’hudah”. Y + H + V (u) d + H. Here the letter “u” is also the “vav”. So we see God’s name in the largest tribe. As promised, Adonai will put his name in his people.

Let’s go to the Derashic level. Does this point to something? We can take this to the “Sukkot” level. “Shema YHVH, ha kol YHVH!” God listens to God! YHVH came to earth in flesh and blood as YESHUA during this time of Sukkot. The Father brought the SON to HIS people. The hands of Yeshua fought for Israel and for ALL of mankind. He was a help against ALL enemies. The Feast/Festival of Sukkot, or the Festival of Tabernacles is the last of the appointed times to celebrate. In the autumn, there are three; Yom Teruah (Rosh Hashanah) and ten days later "Yom Kippur" and then, 5 days later "Sukkot" or the "Feast of Tabernacles". It is a 7-day long period of rejoicing. Today, Sunday, 10/16/22 is the 7th day! yet there is an 8th day, which is Monday. It is "Simchat Torah" (Rejoicing in the Torah) rejoicing that we have God's Word in our midst. We begin again the cycle of Bible study starting over with Genesis 1:1.

Now, back to Yeshua fighting against all enemies. The fight was on the spiritual level, against HaSatan and against the curse of sin. Adonai lifted up and spread out his hands on Calvary’s cross to receive the nails, (symbolized by the letter “vav”) The very name YHVH symbolizes in the ancient Hebrew; “behold or revealed the hand, behold or revealed the nail” His very name points to Yeshua. His death paid the price of sin for ALL of mankind, but to make it effective, one must trust in Yeshua’s sacrifice on the personal level, to receive HIM as LORD and Savior.

(33:11) O YHVH, bless his strength and the work of his hands, strike through the loins of those who rise against him, and of those who hate him, that they rise no more”

We can look at this in two ways. Adonai has indeed blessed Israel, even though it is a small country, about the size of El Salvador, (El Salvador was one of the first countries to accept and support Israel as a nation), a country that has a powerful army, the IDF and Air Force, and was able to defend herself through God’s power, against many Arab nations who wanted to see the destruction of the Jewish state.

“accept the work of his hands” Yeshua, who is our “Cohen Gadol” our High Priest, put out his hands to receive the nails, and thus was his work, his offering, his sacrifice for us all, “accepted” by the Father. Since sin entered the world by a man, (Adam) so a second man had to pay the price of sin that entered the world by the first Adam. It couldn’t be any ordinary man, it had to be “God and Man” both, that is why Yeshua is called the “Second Adam”

Chap 34: We see that Moshe is ready to die and be buried by YHVH himself, yet he allows him to see the land which Israel will inherit. It is amazing that Moshe saw ALL the land as far as the Mediterranean Sea.

Mt Nebo or “Pisgah” (meaning “summit) is actually only 3000 feet high in elevation. We went there in 1999. The Mediterranean Sea is about 65 miles away towards the West. Mt. Nebo is at the North end of the Dead Sea to the East.

Perhaps Adonai gave Moshe a “Close-up look” a miracle that happened only that time, to see so far away. Also, we need to understand that the physical earth, atmosphere, and sky were much clear thousands of years ago.

The very last word in Deuteronomy is "Israel." The first word in Genesis is "In" (the beginning). In Hebrew, the last letter in Deuteronomy is "l" (Israel) and the first letter in Genesis is "B" (B-Reisheet) When we put these letters together we get "Lev" (the "b" also serves as a "v") this is the word "heart" Perhaps this implies that "Israel was in God's heart ever since the beginning." As we are ALL in God's heart, because we are all part of His chosen people, He has chosen us to be "B'nei Elohim" (Sons and daughters of God) through accepting Yeshua/Jesus as LORD and Savior.

Blow the trumpet in Zion 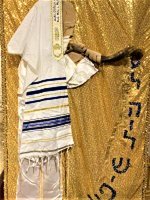 We are at the end of the five books of the Torah, yet as we all know, the whole Torah is ALL the Bible from Genesis to Revelation, yet this was the beginning of Adonai’s speaking his words to be written down by his chosen Prophets, in this case, Moshe (Moses). The word "Torah" means "instruction.' So the whole Bible is "instruction" from God.
Click to expand...