This tells the sad story of a father who failed to discipline his sons, and old king David reaped the whirlwind, Adonijah (which means YHVH is my master) if it were so, He would have been in subjection to his father David, had the nerve to proclaim himself king, even before David dies. Yet David corrects the situation and names Solomon as the future king.

This part of the Parashah teaches us to be under authority, willingly, the bridegroom has his bride under His authority and subjection, BUT NOT in a tyrannical way, not like a “dictatorship” but under a “love “relationship. A wife can be under subjection to the husband, and feel used, like an object, or feel loved and protected, all depends on the husband, if He is under the subjection to the LORD, he will treat his wife with love and respect.

We see here that Yeshua shows love through action, in healing the leper, it is an act of “giving” He gave back health to an unclean man, yet Yeshua also respected and honored the Torah, in telling the man to go to the priest and offer the proper sacrifice for his healing, Yeshua, who is our Messiah, Savior and LORD had ALL RESPECT for the Torah and its commandments.

Another thing we must note is that there are two types of “Tza-arat” (Leprosy) physical and spiritual. One thing is being healed physically, on the outside, and another is being healed on the inside. We can be healthy outside, but corrupt on the inside, or, unhealthy physically, yet Holiness resides inwardly. We need that balance, of being “tahor” (clean) both inwardly and outwardly.

We must also remember though, the situation with Lot from last Parashah, how is was, and is considered as “Righteous Lot” yet was affected by living in Sodom, he had to be almost, “dragged out” by the two angels. His inner being was being affected by living around the wicked. His wife was “sold out” to Sodom and became “well salted” in the end, and his daughters committed indecency with him which led to the origins of Moab and Ammon. Take care lest we be “Tza-arat” inwardly.

The rest of these two chapters have to do with Yeshua healing the paralytic, a Roman officer tells Yeshua about his sick servant. He heals many, and all who come to Him. As Yeshua healed those with physical ailments, we should also be concerned with our spiritual ailments. Through the power of the Ruach HaKodesh, we all have access to be healed by the power of G-d. If we want it and are willing to receive it, we will get it. Our physical bodies will wear away, grow old and finally, cease to function, yet our Spirit being is what lives on forever. But WHERE? That is the choice that every person will have to make.

Salvation or perdition, The choice is within our grasp. If “Yeshuah” (salvation) is our choice, our “corruptible” will be transformed into “incorruptible” when we are transformed to live with Adonai forever, the same with perdition, all who choose to reject Yeshua, will remain in their corruptible essence forever, enduring the fires of the wrath of G-d’s divine judgment. So, make the right choice, choose Yeshua, chose “Yeshuah” (salvation) from 1 Cor 15:50-57


Outside the city walls, (Jerusalem) 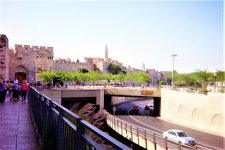