Here, Elisha Ha Navi (the Prophet) ministers to a Shunamite woman, as some prophets had a public ministry, Elisha had more of a private ministry, ministering to individuals more than to the general public as a whole. Yeshua did both, he ministered to the sick, the hurting, the poor, and also preached to the public in synagogues.

The first case involves a Shunamite woman whose husband (now dead) was one of the “B’nei HaNeviim” (sons of the Prophets). It wasn’t that he was a biological son of one of the prophets, but a Torah student of the “School of the prophets”. Today we have Bible institutes, back then, you had the “schools of the prophets” The prophets who were called by G-d instructed those interested in learning in the Words of God written in the Torah, from Adam and Eve up to those present times. Guess you could say kind of “history classes” and lessons to be learned from those “histories”.

The Shunamite woman tells or “cries out” (Tza-a-Kah) to Elisha and tells him her problem. The Hebrew word “Tza-a-Kah” denotes a “cry for legal assistance” similar to “Tzedakah’ (charity) . Her husband owed money to a creditor, now dead, the debt was not canceled, but it was still effective. In those days, if one could not pay a debt, a son or daughter could be taken as a slave or servant and “work off the debt” So, Elisha tests the woman’s faith by the following words;

“What can I do for you? What do you have in the house?”

In this case, the Shunamite woman needed a financial miracle. She had only one pot of olive oil. The woman asked for pots from her neighbors, then, received the oil, in abundance. Many times, when we look for miracles, we extend a blessing to another, and then, we receive from God, it just works that way at times. In the case of the Shunamite woman, just a little bit of olive oil in a pot went a long way.

We can look at this in another way from the Derashic level. We are all “Vessels” or “pots” in the service of Adonai. The oil can symbolize the Holy Spirit. We can ask for more oil, and more oil will be given. We work together to further the Kingdom of God, we are like, many vessels with oil, all working the further the Kingdom, through our diverse spiritual gifts. When we work together, miracles can happen, healings take place, and debts get paid, all through the power of Adonai, we are just “his faithful vessels with oil.”

The other case involved another woman and her husband from the same place called Shunem. The husband and wife offered Elisha a meal and a place to stay when he visited. That was a great mitzvah. The couple was blessed with a child. One blessing often brings on another. Yet the child perhaps had a heat stroke and died. Because scripture says that the boy went out to the field and cried out; “my head, my head”

Elisha and his servant are called and they come to the family’s aid. Elisha places his staff on the boy’s face, then he places his own body on the boy’s body, and the boy is resurrected. We might ask why that procedure. What is the meaning of the staff on the face? The body of the prophet on top of the body of the dead boy? One can only guess. One thing is that a “Staff” (Mateh) symbolizes authority. The face is part of the head, and it was in the head that the ailment occurred, be it a heat stroke or cerebral hemorrhage, or a blood clot.

Elisha represented Adonai, so it was like Adonai bringing the boy back to life, but in the body of Elisha. Did not Peter and Paul do the same thing? They brought back the dead to life as well. When Elisha’s body was spread out on top of the boy’s, it could also symbolize our Messiah Yeshua’s spread out body on Calvary’s cross. His death meant our life. In this case, Elisha perhaps “Breathed” into the boy’s mouth since his “mouth was on the boy’s mouth, his eyes on the boy’s eyes.

As Elohim “breathed the breath of life” (Neshmat chayiim) into the body of Adam, the Shunamite’s son was also “filled with life again” The son sneezed “seven times” “7” is the perfect number.


The Talmid Matityahu (Matthew) writes about different themes. One of the themes is that of prayer; “DO not pray/repeat vain repetitions” We often wonder what does this mean?

Many people memorize prayers and “recite them” over and over again. It becomes routine, and the danger in this is that one can pray “like a machine” and really not understand nor meditate on the meaning of the prayer itself. Then, the prayer becomes just plain words. A parrot can learn to speak, and repeat things, but it doesn’t understand what it is saying. Are we like parrots? or souls created in the image of Elohim?

In Judaism, there are many prayers that are part of the prayer books. It isn’t bad to learn them and repeat them, only “understand” what the words mean and how they relate to our God. Then, when we pray the morning and evening prayers, we can meditate on what these words are really saying so that they do not become just “vain repetitions”.

Here we have the LORD’s prayer. It is not meant to be something we just memorize and repeat like we do many times with prayers. This prayer is something to meditate on, and let the meaning penetrate our souls.

“Avinu BaShamayim” “Our father who is in the heavens” Who has the right to call God, “Our Father” but only those who are members of his family. All of humanity is God’s “creation” and he is humanity’s “creator” but only to born-again believers, he is “Father”

“Kadosh Shmo” (sanctified be his name) HIS name is YHVH (Yod, Hey, Vav, Hey) which comes from HAVAYA (to exist) he is “Haya” (past) “Hoveh” (present) and “Yiyah” (future). And his name is indeed “Kadosh” (Holy). Contrary to popular belief, the Torah does not prohibit one from using it, on the contrary, the Word of God says “Call upon the NAME of the LORD!”

“Thy kingdom come, thy will be done on earth as it is in heaven” The “kingdom of Heaven” is HIS activity on earth, so, it is already here. It has been here since Genesis 1:1. It is here and manifests itself in the midst of his believers, churches, synagogues, congregations, bible study groups, etc. There is a “coming” political kingdom and a literal “New Jerusalem” which will appear on earth someday in the future, and what a time that will be.

“Give our bread continually”. Our “daily bread” does not consist only of literal food, but of ALL of our basic needs. YHVH is a loving God and many times gives us even our “wants”. He will do this “continually”, I have seen this many times in my life when I just “think” of things I need, and all of a sudden, I get them, many times for free.

“Forgive us our sins as we forgive those who sin against us” Many times, we commit sins against God, and yes, we want Him to forgive us, but what about people who have committed offenses against us? Are we holding grudges against them? If so, how then can we expect forgiveness for our sins? Our sins against our Holy God are greater. We must learn to forgive those around us. At times, it is hard, but it is a “command!” when it can’t come from the flesh, it must come from the spirit.

“Do not lead us into the power of temptation, but keep us from all evil…amen” What is the “power” of temptation? It is succumbing to the power of HaSatan. Remember that just because we are “B'nei Melech” (children of the King) does not mean that we are free from being tempted. Everyone on this earth has been tempted, even our LORD and Messiah. This is part of testing, we can be tempted, but that does not mean that we will give in to the temptation and commit sin. It is OUR choice, the very last word is “Amen” which comes from “Amun” which is “to say something that is true” so, when we say “amen” it is “so be it, as it is the truth from God” (this was taken from a Primitive Hebrew text, as the first “LORD’s prayer was written in Hebrew) there is also an Aramaic rendition of the LORD’s prayer, look it up on “YouTube”

Kefa (Peter) reminds the reader that just as we serve a God of love and forgiveness, the same God, Adonai-Elohim-Yeshuah, is a God of wrath and vengeance, a jealous God. A God who punishes the unrepentant wicked. He gives the examples of the fallen angels who went into human women, thus causing mutant genetic offspring and “Giants” They are in hell today, as are all the wicked souls that did not repent.

We all like to listen to messages involving God’s love, but do not care to listen to the “hell, fire, and brimstone” messages, such a message was preached on July 7th, 1741 by Jonathan Edwards, and thus brought revival to New England.

Our Heavenly Father is a Father of love and reaches out to all who will listen, but by no means is an “arm-twister” He will not force anyone to come to Him. We can accept or reject; the choice is ours.

Jerusalem, in the old sector 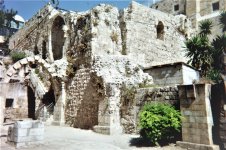