The title of the Parashah is “Sarah lives” or “Sarah lived”. Yet Sarah is dead, so, how does she live? She lives on in the memory of Abraham, her legacy lives on, her influence lives on, and this is what the patriarch wants for Isaac.

I remember some of the words of Marine Gunnery sergeant Hartman to his trainees in the movie “Full Metal Jacket” “Most of you will go to Viet Nam, some of you will not return alive, but even dead, you will still live, you will live on in the spirit of the corps.”

So even dead, Sarah continued to live on as a godly wife and mother, no doubt that Abraham wanted to bless Isaac with a similar wife. Torah says that Sarah lived 127 years. It is not often that the Torah records the age of women, but Sarah is the exception. We can see some symbolism in that number. I guess there are several ways we can look at it, one way is to see the Hebrew letters associated with numbers, 100 is Qoph (Q) 20 is Kaph (K) and 7 is Zayin (Z) Seven is the number of YHVH, the perfect number. According to some rabbis, “120” years are a “full life”. So, Sarah lived a “full life” plus 7 more.

Moshe lived a “full life” and maybe would have lived longer had he not “struck the rock” Sarah lived a “Kadosh” life (Holy life, separated to serve God, her husband Abraham, and raising her son Isaac. One could say she was “anointed to serve” (Kaph) is a letter that symbolizes “anointing”. Zayin (z) is the letter that symbolizes “weapon” anointing and holiness is a “weapon” one can use against “HaSatan” our spiritual enemy can be defeated by the fruit of the Spirit, through the Ruach Ha Kodesh.

127 can also symbolize “Echad” (unit of oneness) (1), “covenant blessing” (2) “godliness” (7) Sarah received the blessing of being a godly woman, who joined in the “covenant blessing” of Abraham with YHVH, and together became “Echad Am” (One people) the Hebrew people who later became the Nation of Israel. When we add 1+2+7 we get 10, which is the number of “Torah” (some say “law” personally, I don't like using that word, it is misunderstood) but “Torah” means “instruction” Sarah honored Abraham, and YHVH by submitting to their instruction, she was submissive, in the right way. Yet Sarah had her times of happiness and sorrow as All marriages go through.

Abraham and Sarah loved each other, and in death, Abraham showed his love toward Sarah by purchasing an overpriced piece of real estate. 400 silver shekels was a lot for a cave on a piece of property in Hebron, but He didn't mind paying for it, (guess it is like buying a hamburger for $25) It had to be “written down, and documented” legally, not just “words”, we see that today, words are nothing, but if it is signed, sealed, written down, you can take it to court!

So Abraham honored his wife both in life and in death. One of the biggest and most drastic changes in one’s life is the “death” of a spouse. We see the words in the Torah which recount the time of Sarah’s death. “and Abraham came to mourn for Sarah and to weep for her. And Abraham stood up from before his dead, and spoke unto the sons of Heth saying…”

There is a time for mourning and weeping, and a time for joy, a time for continuing with life, as life does go on, with or without a spouse. Abraham had the right to mourn and weep since Sarah was part of his life for many, many years. We do not know when they got married, but when Abraham was called by Adonai, he was 75 years old, and he was married at that time. We could say that for about 50 years, Abraham had Sarah by his side. The Adonai called her home.

There will be a time when Adonai calls home our spouses, how will we respond when that happens? Will we cry out to God; Why? But are our spouses our own? Or do we all belong to Elohim? What are we but souls inhabiting finite bodies which will eventually cease to function and return to the earth?

A baby enters the world with clenched fists, yet leaves the world with open hands. We all want to hold on to everything, even spouses, yet we have to let go and let God have his way. A spouse, a wife, or a husband, is like a library book. We will take the library book and read it cover to cover, do we understand what we read? We have “x” amount of years to do it. But the master Librarian will call for his book to be returned someday, and we will have to deal with that.

A spouse is like a jewel to be worn and cared for, for “x” number of years, but the Jeweler will call for his gem someday, and we will have to take “her” or “him” off and return “her” or “him” to Jeweler of all creation. I think that the more we love our spouse, the more difficult it will be for us to let go someday when our spouse is at death’s door. It wasn’t easy for Abraham, and it will not be easy for us.

I think that the time for caring, loving, for giving flowers is now that our spouses are alive, not at the grave site. Does one wonder what the surviving spouse will say? “May he (or she) rest in peace!” …or…” Now that he (or she) is gone, I can rest in peace!!” Abraham wept and mourned, but then, he got up and “buried his dead out of his sight” He continued with life, searched out a wife for his son Isaac, and eventually Abraham got remarried, to Keturah who bore him six children (Chap 25).

There is life after the departure of a loved one. The most difficult part of losing a loved one, especially a spouse, is if the spouse is an unbeliever, lost, without salvation. THEN we shall never see that spouse again, EVER! All the more reason to be “equally yoked” To lose a spouse in death is to be separated for “a season” but be reunited with her (or him) later on in heaven. That is the way we have to look at it because it is the truth.

Some people, like Abraham, will marry again, while others will not. That is a decision every widow or widower will have to make. Me? I wouldn’t like living alone without someone by my side, but that’s me. Love is having to “let go” when our Master calls for “going home” it WILL come.

The true meaning of the word “love” is NOT feelings. What is “Love at first sight?” (Hey, I like your moves, I like your legs, your hair, your eyes, your build, etc.). yet feelings, and emotions can lead two people to enter into a covenant of “love”, “love” is the action of “giving” the Hebrew word is “Ahavah” it has the verb “hav” which is “to give” and the word “av” is in there, being “Our Heavenly father gives” He proved his love toward us that He GAVE His Only Son, Yeshua, as a sacrifice for our sin.

When a couple chose to marry, share life together, provide one for another, in health and in sickness, and not “cop out” on each other, THAT is TRUE LOVE. The words, “I feel I don't love you anymore” are silly, worthless words. Imagine if Sarah had told that to Abram. Or if Abram would have said that to Sarah, “I don't love you anymore, because you can't give me children” and the two separated, where would the Nation of Israel be today? It would be nonexistent. Yet they kept by each other’s side in good times and in the bad times, the times of drought, the “Egypt” times, the “Ishmael” times, and the long waited “Isaac” times.

Abraham sent his servant Elazar to look for a wife for Isaac. (I wish that custom was still here with us, parents getting their children husbands and wives, those were the 'good old days' (my opinion). He carried 10 camels with gifts, the “bride price” for the “bride to be”. He had to go to Mesopotamia, to Abraham's family, He did NOT want a Canaanite woman for the bride of Isaac, a pagan Canaanite woman would have been an “unequal yoke” that is wisdom for us today, a “born again believer” should only marry another “born again believer” where the two worship and serve the “same God YHVH/Yeshua”

Eliezer observed “Rebecca's actions” Rivka watered the thirsty camels, sought not her own comfort, but had a servant's heart. This is what Elazar was looking for, Abraham would be happy, and so would Isaac. The “engagement jewelry” was a nose ring and gold bracelets” today in our society we give an engagement ring.

Abraham wanted a wife like Sarah for his son Isaac. We might think, what kind of wife (or husband) would one believer look for? Well, there are certain qualities to look for in looking for one’s “life mate”.

If a man is looking for a woman to be his wife. I would think that he might want a woman whose first love is for God, for Yeshua, and to obey and follow the Torah. That the woman also be humble, who will run the home with wisdom, and with money in her hands, will be spent wisely? She should be a woman who will raise her children according to the Word of God, and to not waste time with “fairy tale reading” but with “Torah Tale reading” if she is to read “Bed-time stories. I have not mentioned the “physical” characteristics, since “how beautiful or not” is not of prime importance, but yes, is a bit important since men are usually in search of “what attracts the eye”

There is a story about Adam and Eve. Adam was sad because there was no mate for him among all the animals, so Adonai said to Adam; “I will give you a mate, one who will never say no, one who will care for you and for your house, never argue with you nor ever say unkind words to you, one who will raise all your children, one who will cook for you and be your perfect servant and your lover any time you want.”

Adam was happy, and he said; “and what will all that cost me?” God said to Adam; “It will cost you an arm and a leg!” So, Adam thought for a moment, then asked; “What can I get for just a rib?” (well, you know the rest of the story, but it works both ways)

Now “Rivka” had to be “willing to go with Eliezer to be Isaac's wife”. We can see this is our relationship with Yeshua. Yeshua/Jesus is the “bridegroom” and we, the “Kehillah” (Congregation of “called out ones”) are the bride. We have to be a “willing bride” to go with our “heavenly bridegroom”.

Just as Eliezer brought gifts to the bride-to-be, Yeshua has given “gifts” to us as HIS Bride; Salvation (Yeshuah) an eternal home/mansion in Heaven, spiritual gifts to do service and minister with. Healthy bodies (for the most part) in which to inhabit, spouses and children, jobs to earn a living, if we think about the list could go on, as to the “Blessings” we have through Yeshua. 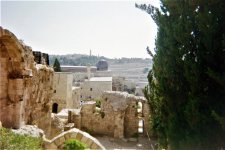