The calling of Navi Yirimyahu (the prophet Jeremiah) As we see in the beginning, God says, “Before I formed you in the womb, I knew you!” A great statement, a great truth that flies in the face of abortionists, those that say, “a fetus is not yet human”. If God is saying that EVEN BEFORE” being formed in the womb, He had Jeremiah in mind.

Where are we before being formed in the womb of our mothers? No one seems to know; the WORD does not say. Some believe that we are in Spirit form and that we await bodies to go into, and that when a man and woman unite together in love when the sperm meets the egg, there is a guardian angel that is sent to be with that person, and either God or the angel takes the spirit and puts it inside the tiny microscopic body. Well, who knows if this is true, but it might just be that way.

Everyone has a calling in life, we just have to find out what it is. Our first calling is to “get right with God” and accept Yeshua as our Messiah, LORD, and Savior. That act of faith will secure our eternity in Heaven. Then we must search our hearts and ask the LORD what our calling will be. It may be full-time ministry, it may be a secular job joined with ministry. The gifts of the Holy Spirit will enable us to do many things. Jeremiah was called to a difficult task, to “wake up” the nation of Israel that was seeded deep in sin, his calling as “Prophet” (or spokesman) was for him, he accepted it, and we have his book to prove it.

Prophets declared the words of Adonai to the nations, today we have the complete written word of God. Everything we need to know is written in the Bible. His entire WORD is in 66 books. Can God speak through individuals today with “special words?” Sure, but those words will NOT contradict what is already written in the Torah.

If you are called to teach and expound God’s WORD, (which was the mission of the prophets of old in a general way) STUDY to show thyself WORTHY, a WORKMAN that needeth not be ashamed, but rightfully dividing the WORD of TRUTH!

” In the beginning, was the WORD, and the WORD was with God and GOD was the WORD” This opening statement clarifies that YESHUA was part of the creation in the beginning, Yeshua has many names; Son of David, The Second Adam, Son of Man, the WAY, the TRUTH, the LIFE, the LIVING WORD, and many more.

WORDS are alive, and with words, Elohim created the heavens and the earth, bringing into being all that is in existence today. There are the things that were “created” (Bara) and those things (such as man) that were “Made” (Asah) “Asah” is used when things are “made” from pre-existing material, such as Adam (man) from the earth, dust, water, and the spirit was put inside the body. "Bara" in complete meaning is to "create with a purpose" All things created had a purpose. The purpose being reproduction and bringing into being more of that created kind.

The title of Yeshua “The Living Word” in Hebrew is “HaD’bar Chayim” the word “Dabar” which is “word” consists of three Hebrew letters, “Dalet, Bet, and Resh” when we look at this from an ancient Hebraic perspective, we see the symbolism in these letters which can say; first door to the house” We are “households” and when Yeshua knocks on our “doors” do we open our door to let Him in? the word in Hebrew for “door” is “Delet” which can mean in the ancient Hebrew symbolic letters “instruction is the door to the covenant” God’s instruction through the Torah points us to Yeshua who is the “covenant” of our salvation.

In time, GOD was manifested in human form as YESHUA, who is the “Living WORD” He fulfilled the covenant of the cross to pay the price of sin, to crush the head of HaSatan, to teach the Torah, heal the sick, we as followers of Yeshua are called to share and teach his WORD to all who will listen. Are you fulfilling YOUR CALLING?

In the beginning, God created...even the birds of prey...for a specific reason 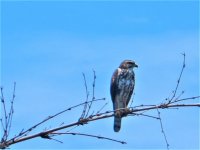