Israel cries out “The LORD hath forsaken me and forgotten me” but the prophet through the Holy Spirit assures the people, NO, the LORD has NOT forsaken you. There is a big difference between, “abandonment, forgetfulness, and chastisement”. The fact that YHVH has punished his people does not mean that He has abandoned Israel. When a father chastises his son or daughter, does that mean he no longer loves him or her? Does he cast them out of the house? Or say, “you are no longer my son or daughter?”

No, of course not, Scripture tells us that a father who loves his children will discipline them. We can say the same with YHVH and “Am Israel” He loves his people, and so, HE will discipline them. Yes, he cast them out of the land, but in goyim lands, they continued to live and spread the teaching of the ONE GOD (Echad) who is Adonai-Elohim-Yeshuah. We are loved by our heavenly father, even when it hurts.


Some are a bit confused when Yeshua says to his brothers, “You guys go up to Yerushalayim to Sukkot, I will not YET go up. He did NOT LIE, (as some critics try to say). He was planning to go up, but not at that time. Remember that the celebration of Sukkot (Tabernacles) is a 7-day celebration, culminating on the 8th day, “Hoshanah Raba” it is possible that his brothers and his talmidim went during the beginning of the festivities, and Yeshua waited until the end, the 8th day.

It was on the 8th day that the priests brought up water from the pool of Siloam, and Yeshua took this opportunity to say to the people; “If anyone is thirsty, let him keep coming to me and drink, whoever puts his trust in me, as the scripture says, rivers of living water will flow from his inmost being”

We can remember the time when “B’nei Israel” (the children of Israel) were in the desert, and they got water from a ROCK. The ROCK symbolizes Yeshua, who is the ROCK of ages and the LIVING water. Water flowed from the rock so that the Israelites and the cattle could drink as much as they wanted. In Hebrew, there are 3 words for "Rock" which are "Tzur" and "Aven" (which is a combination of "Av + Ben" (Father and Son) and there is "Selah" (which means a stone fortress). The ROCK which gave water to the Israelites was a "fortress" It can be seen today in Northeast Saudi Arabia, it seems to be about 50 feet high and it is split down the middle, giving a "lake" of water to all the congregation (certainly not just a puddle).

The water that Yeshua talks about is our inner life through a renewed spirit, remember that He also told the woman of Samaria the same thing. It was to her that he revealed himself as Mashiach openly. So, when we read the WORD of God and listen to music that praises HIM, we are receiving “living water”

Stay on the path which the LORD has chosen for you 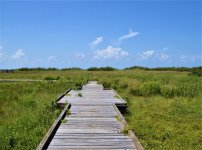