It's telethon month! If you enjoy Real Science Radio, The Dominic Enyart Show, Theology Thursday, and Bob Enyart Live, consider assisting financially to keep us around! Help us reach our $30,000 goal by purchasing any KGOV product, especially those listed here. Note that all recurring monthly support is multiplied by ten towards our telethon goal. Thank you for your support! Check out the show summary below!

Sponsor a Show! Click here to help keep us broadcasting! 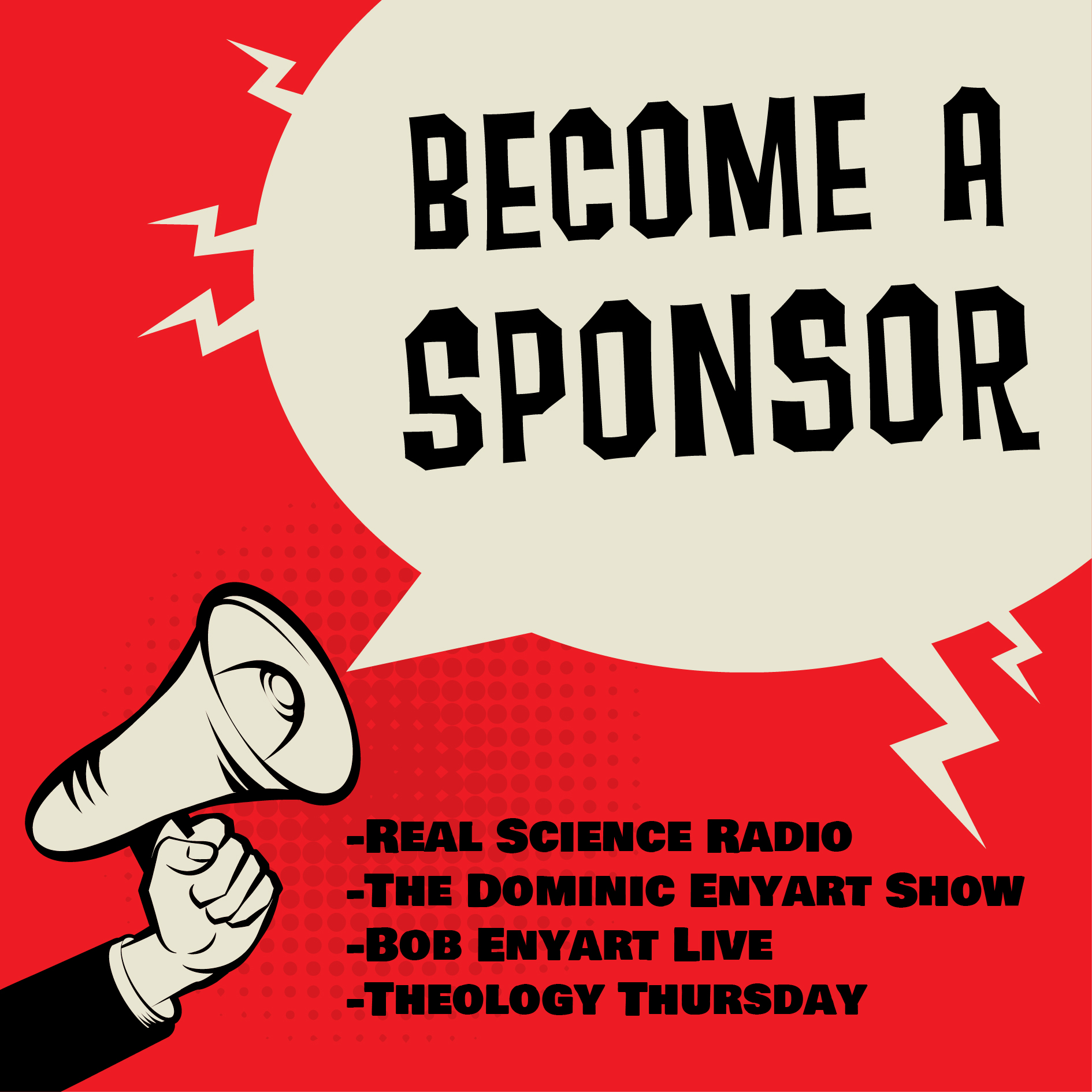 If you would like to help support our KGOV.com shows, consider sponsoring a broadcast! Monthly sponsorships are the very best way to help us stay on air.

Want a Shout Out?
Most of our sponsors prefer to remain anonymous. But if you'd like a shout-out from one of the guys, please let us know in the "comments" section of your order. Or feel free to email us, service@kgov.com.

Note: We will have to get in touch via phone before fully processing your subscription. Please expect a call from our friendly KGOV staff after signing up.

The Plot: 2nd Edition
A year after his passing, we have made available Bob's 2nd edition of "The Plot!" Currently, the only way to get your hands on a copy is by signing up 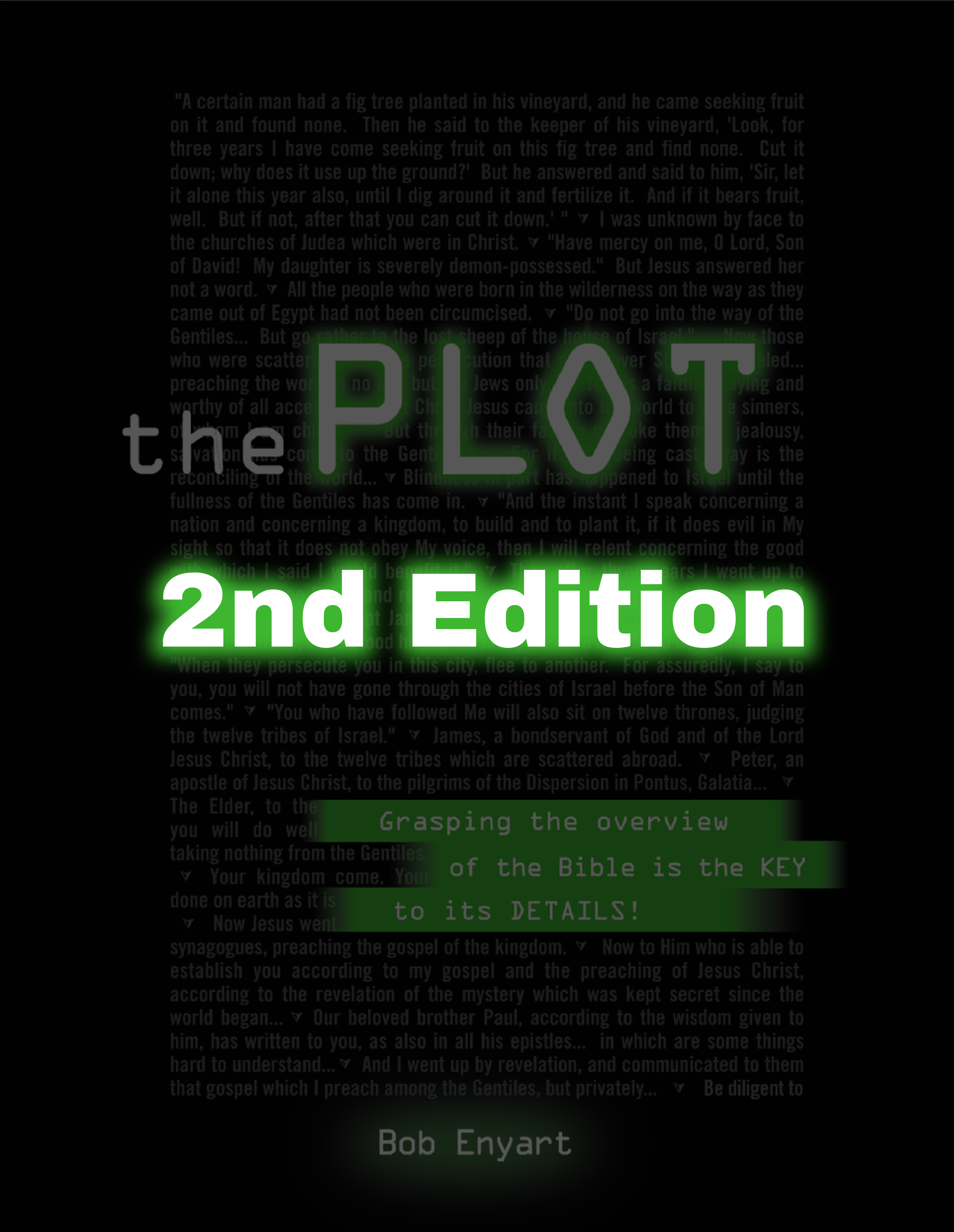 The ministries of so many Godly leaders, authors &amp; preachers have been magnified tenfold, or even a hundredfold after their passing. Think of C.S. Lewis, and how he still, today has such an impact on millions. We have no doubt Bob Enyart could have a similar impact, and your sponsorship of just one show a month will be a massive force to magnify this ministry and the Gospel. Bob Enyart Live Broadcast Classics still air every Monday, at 3 pm on KGOV.com! See more by clicking here. 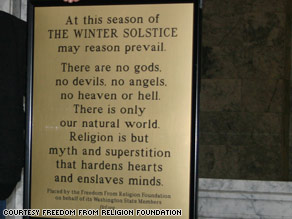 teenager, he was involved with the ministry of Kathryn Kuhlman, one of a group of so-called faith healers. (See a BEL listener, TOL's Crow, who initially compared Bob to Benny Hinn until...) After interviewing atheists including:
- ABC's Reginald Finley, called The Infidel Guy, from ABC's Wife Swap program;
- TheologyOnline's psychologist Zakath;
- TOL's member who calls himself Fool;
- John Henderson who wrote the book God.com; and,
- Michael Shermer, an editor with Scientific American and the Skeptic Society who in in this famous 73-second excerpt on BEL denied that the sun is a light, illustrating that it's tough debating atheists when they're hesitant to admit to even the most obvious common ground; now comes Dan Barker, a director with the Freedom from Religion Foundation.

* Truth, the Senses, the Universe, Sun and Moon: Acknowledging the difficulty in proving a negative, Bob Enyart stipulates at the outset that atheist Dan Barker would not have to worry about whether God was out on a star in a galaxy far, far away, but rather, Bob and Dan could discuss the evidence before us all, right here and right now.

Bob then asks Dan Barker whether or not objective Truth exists. The atheists who will acknowledge that objective truth exists often give so many qualifiers that it can be hard to know if they believe in objective reality. Dan stressed, with Bob's concurrence, that "the word truth is not a thing;" that is, truth is not a physical object. After Bob and Dan seemed to agree that Truth and objective reality exists, later in the discussion Dan seemed to backtrack, and suggest that everything could be an illusion including Barker's very own existence. Yikes! With this Bob blew up in frustration. Not really. Actually, Bob simply reminded Dan of Descartes' "I think, therefore I am" and when Dan said that perhaps everything was an illusion, Bob replied, "Dan, you can assert that you think that I am an illusion, perhaps you think I'm in a dream you are having; but no, you cannot assert that you are an illusion; that YOU do not exist." And Bob indicated Dan's toying with the possibility that perhaps he didn't exist was further evidence that he was equivocating earlier regarding the existence of truth. In the end, Bob was thankful that he and Dan could once again agree that Dan existed, so that the show could proceed.

Dan then acknowledged that knowledge can come from sources other than one's own five senses. Bob pointed out that some atheists assert that "only your five senses provide real knowledge," about which he typically asks: "says which of the five?" It wasn't until he was off air that Bob noticed that at 13 minutes into the program Dan seemed to backslide by saying that we should "assume" that "there's an objective reality." (Bob also would be thankful if Dan could email a clarification as to whether he agrees that "reason and logic" are a source, quite apart from the five senses, of knowledge.)

Bob and Dan also talked about whether the universe had a beginning, and Bob quoted Hawking:

"This argument about whether or not the universe had a beginning, persisted into the 19th and 20th centuries. It was conducted mainly on the basis of theology and philosophy... But if your theory disagrees with the Second Law of Thermodynamics, it is in bad trouble. In fact, the theory that the universe has existed forever is in serious difficulty with the Second Law of Thermodynamics. The Second Law states that disorder always increases with time. ...it indicates that there must have been a beginning. Otherwise, the universe would be in a state of complete disorder by now, and everything would be at the same temperature." -Stephen Hawking

To which Dan stated that Hawking has had to correct himself in the past, to which Bob Enyart replied, "Yes, but not about this." Dan tried to explain the continued existence of the universe by claiming that there could be many universes. (Please note, as Bob demonstrated in his 10-round moderated debate with TOL's Zakath, atheists often rationalize "complexity by... introducing even more complexity," completely apart from any empirical evidence, wildly increasing complexity in order to explain it; if an atheist has a problem in that he cannot explain by the laws of science the continued existence of the universe, he merely posits infinite parallel or successive universes. The cover of Discover magazine July 2008 states "Parallel Universes, Infinite Yous" and they ask a physicist, "Can you explain parallel universes?" and Max Tegmark replies, "Three [parallel universes] have been proposed by other people, and I've added a fourth... go far enough out and you will find another Earth with another version of yourself." Yes, attempting to get rid of the Creator requires extraordinary creativity.) Bob argued that there is no empirical evidence for parallel universes, and that if a succession of universes gave rise to one another, that entire process would be a perpetual motion machine that would have run out of useable energy long ago.

Bob argued that people should not believe that the Big Bang theory can actually explain the existence of the universe because:
- since big bangers don't know "which objects came first, stars or galaxies? Theoretical science offers no clear guidance..." according to 23-year Nature magazine editor John Maddox, p. 48, What Remains to be Discovered;
- in the universe's supposed 15 billion years there's insufficient time for its temperature to even out to 2.7 K;
- the natural formation of a solar system precludes gas giants like Jupiter and Saturn;
- 99% of the solar system mass is in the Sun, yet the planets have 99% of the angular momentum (spin); and,
- after $20 billion spent on the U.S. Apollo and lunar program to determine how the moon got there, the only theories simply can't account for the evidence.

Dan countered that science always increases in knowledge. And Bob agreed, and then asked if scientific evidence might preclude certain possibilities (like millions of flies spontaneously generating daily out of carcasses, or the solar system forming from a condensing gas cloud). Bob brought up that the supposed Big Bang would have been an event that does not even comply with the laws of physics and which atheists accept on faith. (One tiny example is the so-called Inflationary Period which supposedly began shortly after the explosion and saw a wild and virtually instantaneous acceleration of the speed of the expansion of the universe with a subsequent virtually instantaneous deceleration, none of this having any correlation to the physical laws and hardly qualifying even as a scientific proposition.) Bob concluded that people should not be tricked into thinking that atheistic cosmology has proven how the universe could exist apart from a Creator, when they can't explain the temperature of the universe, the formation of stars or galaxies, gas giants like Jupiter and Saturn, the spin of the Sun vs. the planets, nor even the moon, our very closest outer-space neighbor!

Dan closed by agreeing to Bob's suggestion that they trade materials:
- Bob's DVD on the Evidence for the Resurrection of Jesus Christ, and
- Dan's book, Godless: How an Evangelical Preacher Became One of America's Leading Atheists, which has a chapter arguing against the resurrection,
and that they schedule a debate on Christ's resurrection. A BEL staffer put Dan's DVD in the mail right after today's program. Stay tuned...
You must log in or register to reply here.
Share:
Facebook Twitter Reddit Pinterest Tumblr WhatsApp Email Share Link
Top