The prophet speaks through the Spirit of YHVH saying: “I, YHVH, have called you in righteousness, and I take hold of your hand and guard you, and give you for a Brit (covenant) to a people, for a Light to the Gentiles, to open blind eyes, to bring out prisoners from the prison, those who sit in darkness from the prison house” 42:6,7

Some say that this is referring to the prophet himself? Really? Was Yeshayahu called to be a “covenant?” to open blind eyes? To set the prisoners free? Yet re-arrange the letters in the name “Yeshayahu” and we get Y-E-S-H-U-A-H! it was HE who the prophet was talking about. His name means “Salvation” and He came as a ‘blood-covenant” that would not simply cover for a year, but to get rid of, wipe out, the sin we inherited. He came not only to his own Jewish people but also for the peoples of the nations outside of Israel.

He not only opened the eyes of the physically blind but also for those who were spiritually blind. Once we did not understand the Bible, or we could have cared less for the Bible, but since we have accepted Yeshua as Messiah and LORD, now we have the Holy Spirit to help us understand the Torah. Once we lived in spiritual darkness, in the prison of HaSatan, called the “lost world” but we have been freed to follow HIM who set us free.

The new paths are the Torah paths, David wrote; “thy Word is a lamp unto my feet and a light unto my path”

By allowing God’s Word to take root in our lives, our paths are made straight, we know now how to tell the difference between the Holy and unholy, between the clean and the unclean. The WORD which is taught to us through the Ruach HaKodesh, using God’s chosen teachers is His gift to us, as born-again believers, it is our duty to stay on the right path.

There are “blind people” who have eyes, yet do not see, they may see physically, but they do not see spiritually, God’s Word can change all that (43:8)


We read the ancestry of Messiah Yeshua, his birth during one of the evenings of Sukkot, and his escape with his parents to Egypt when Herod sought to kill him. Later, YHVH “brought up HIS SON out of Egypt” Adonai saw his children go into Egypt through Jacob, and they also came out of Egypt through Moshe, Adonai led HIS SON down to Egypt with Miriam and Yosef, and Yosef and Miriam led him BACK to Israel.

Now, Yeshua, HIS Son leads us ALL out of the Egypt of this world through a relationship with HIM, In John 1:1 it says; “In the beginning was the word, and the word was with YHVH, and YHVH was the WORD” In this we see that Yeshua took part in the creation of this world, as “The WORD” this is the essence of the name “Elohim” the plural G-d who is “Three” yet “One” like; 1 x 1 x 1 = 1.

Another aspect to point out are the words; “Bethlehem and Judea” Yeshua was born in “Beit Lechem Y’hudah” (Bethlehem in Judea) In Hebrew we can understand; “Yeshua, who is “Salvation” who is the Bread of Life, was born in the House of Bread of YHVH! It was sensible for G-d to come to earth in human form in the House of Bread if He is going to have the title “Bread of Life”

We can look at this prophecy; “And you Beit Lechem, In the land of Y’hudah, are by no means the least among the rulers of Y’hudah, for from you will come a Ruler who will shepherd my people Israel.” No wonder King Herod was terrified. He misinterpreted this prophecy, thinking that his kingship would be replaced by Yeshua. Yeshua DID become a “Shepherd” who “guided human sheep” at least those “sheep” that chose to follow HIM! As for being a king. This “kingship” would be in the “World to Come” as explained to Pontius Pilate.

Yeshua came to this world to shepherd the lost human sheep to the “Living Waters” of “Yeshuah” (salvation), to heal the sick, to teach the Torah, and to die for our sins. The king’s crown…well…that would have to wait…until the next coming, which might be just around the corner.


On Simchat Torah, at our synagogue, yours truly and the Mrs. 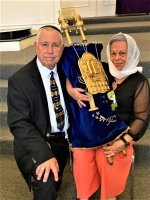