The prophet speaks and writes through the Ruach HaKodesh (Holy Spirit) “Jacob have I loved, but Esau I have hated”. You ask, “isn't God love?” isn't God all about love? Why does he “hate poor Esau?” The word “hate” has the same meaning as “reject”. YHVH who is “all-knowing” knew even before Esau was born that he would reject HIM, so, YHVH rejected Esau!

However, did you know that in some ways, "Esau" can symbolize "Messiah Yeshua?" I was surprised at this but I learned something interesting from a Messianic rabbi in Israel concerning Esau, and I would like to share it. The Hebrew name "Esau" using Hebrew letters consists of the letters "Ayin" "Sheen" and "Vav". Only three letters, pronounced "Esav" which means "hairy" the other name for Esau is "Edom" which means "red" and also contains the word "dam" which is "blood"

In Hebrew, we have the method of "gematria" which assigns numbers to each letter, and when two words have the same "sum" when adding the numbers, there is a relationship. The name "Esav" adds up to "376" and so does the word "Shalom" (Peace) = 370. So, could we say that in real life, Esau was a bloody-man? since he was a hunter of game and Isaac loved the venison that he hunted? I guess so. Was he a warrior? Scripture does not say but he did meet Jacob after 20 years with 400 armed men. Could he have been a mercenary? a soldier for hire? maybe. But we know that he was disinterested in the things of God, a worldly man. So how do Esau and Yeshua/Jesus compare? how are they similar? here are some ideas.

Esau spilled blood, (blood of animals, game, venison) Yeshua shed His own blood for our sins. Esau might have been a warrior, a man of war.
Yeshua declared war against Satan and triumphed over this same enemy at the Cross of Calvary. Yeshua is the "God of Peace" and made "peace" between lost mankind and the Father. Esau extended his hands towards Jacob (Israel) and forgave his brother for taking the precious birthright blessings by trickery. Esau received Israel in "peace" and not in anger or revenge. Scripture says that Esau was "perverse" in life, yet in his "name" we can see "Shalom" (peace) kind of interesting I would say. Also, the name "Esav" with the letters rearranged, almost spells out "Yeshua" (minus the "y")

Malachi also talks about polluted offerings and corrupt priests. No wonder God is fed up with Israel, they have gone “the way of Esau” offering God the “leftovers” and not offering with “pure hearts”. It is like today if we serve the LORD with less than our best, or only with “half a heart” or just because we feel we “have to” then, we are offering “polluted offerings” We should serve GOD with all we have, with the best we have, or not at all!

Yeshua sends out the twelve talmidim, to teach Torah and to share the word that Yeshua is Mashiach, and has fulfilled all the prophecies of the Torah. First to the “lost sheep of Israel” remember that Israel has been scattered to many different countries, many being absorbed by the nations, yet still remember their identity, but even in Israel, there are those who need to know the truth about Yeshua as Messiah, prophesied by Moshe and the prophets

The work and ministry of sharing/teaching the WORD of God is not a lone undertaking, it is to be shared by many, and ALL who have that calling. Even Yeshua, God in human form, could not be in all places at the same time, so he sent out his followers, to fulfill the “Great Commission”.

Today, we are equipped with the “gifts of the Spirit” to fulfill this great task, and today we have the internet to help spread the “Good News” whereas hundreds of years ago, only papers and books were available to those who took up that task. We are living in exciting times, let's take advantage of everything that is available to us today. Use all things to the glory of God.

Very interesting verses; “For not everyone from Israel is truly part of Israel. Indeed, not all descendants are from the seed of Abraham. From the Hebrew New Covenant it says; “Lo kol asher heim mi-Yisrael gam Yisrael” (not all of them who are from Israel also Israel).

If we remember, Abraham had two sons from the womb of Sarah, Ishmael and Yitzchak, even though both were his sons, the promise was in Yitzchak. The descendants of Ishmael are now the Arab countries. Can we say that they also have the same interests that all believers have? Are they not following another religion? Even though quite a few are born-again believers.

In Israel today we see quite a few cultures and people groups, but not all are direct descendants of Abraham. But let’s go a step further and say; “Not all have the faith of our father “Israel” and many in “Israel” have little or no faith at all, so, how can we have the faith of “Israel” and thus be part of “Am Yisrael?”

So, to be a real part of “Am Yisrael” to be part of the “Covenant of Abraham” it doesn’t depend on blood relation, but “Spirit” relation. One can be a physical descendant of Abraham, and be lost and going to hell, but one can turn that relationship around and be “heaven-bound” through a personal relationship of Messiah Yeshua, the hope of Abraham, Isaac, and Jacob.

A full moon over South Florida 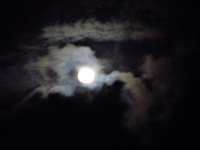