Moshe continues to retell the experiences of his life to “Am Israel” as the end of his life is nearing, He is like a father on his death bed, and causes all of his children to come near and listen to their father’s experiences, or rather “all” of their experiences.

“V’et ‘Chanan l’Adonai” begins Moshe, “I pleaded to YHVH…” on the account of entering into the promised land. As we remember, Moshe in anger and had struck the “Rock” (Selah) and yet, water still came forth because of the mercy of Adonai, yet now Moshe pleads for mercy, the word “chanun” is a form of the Hebrew “mercy”. One Israeli singer has a song which is; “Avi Chanun” (My father who is merciful). So, Moshe in a way is saying, “I plead for mercy to Adonai” let me see the promised land.

Yet the answer of Adonai was still “No” (Speak no more of this matter). We are all destined for “x” amount of years on this earth, who knows if, through actions we do, might “speed up” that time, or even “prolong” the time. King Hezekiah pleaded for more years of life, and he was granted the years, however, during those extra years, there was born to him “Manasseh” who proved to be one of the worst kings in Israel. Should Hezekiah have asked for those extra years?

Another way we can look at God's answer is that He might be saying; "I put you on earth to bring my people out of Egypt, to bring them here to me, to give them my Torah, and to lead them to this point. Now, I have in mind another to continue where you have left off. "Yehoshua" will bring them into the promised land. You have completed your work."

We should take advantage of the years that God is giving to us on this planet called “earth” and make the best of them. If He has called us into ministry, let us perform that which He has called us to do to the best of our ability, doing it unto HIM who is the author of life, and when he calls for us, we will go, without complaining, or ask for “more years”

In this Parashah, we see the review of the Ten Commandments. What are these all about? They formed the “Ketubah” the contract between Elohim and Israel. They were given on Har Sinai, directly to the Israelites by HaShem himself, the rest of the 603 mitzvoth were given to Moshe who relayed them unto the people, still, they ALL came from Adonai.

(4) “Now, therefore, harken O Israel, unto the statutes and unto the judgments which I teach you, for to do them” Moshe was the teacher, taking all that the “Master” charged him to teach, and not “adding to” nor “diminishing” anything, teaching all the details, the “fine print” sort of to say. Teachers of God’s Word, have a unique calling, it is their life, it is their passion, and they will not rest until they accomplish what they have set off to do.

I AM the LORD thy God: “Anochi Adonai Eloheicha” He is emphasizing “I AM” (I MYSELF AM) “Anochi” is a very important statement, telling his people, that it was HE who brought them out of Egypt, and out of slavery. Two very important things, therefore, He has every right to be their God, and He has every right to be OUR God, since He has taken us out of the “World of Sin” (Egypt) and out from “Spiritual slavery”

“THOU shall not have any other gods before me” since pagan worship was the norm of Egypt, worshiping and bowing down to false “elohim” this was a reminder to Israel that YHVH is different, He is NOT like the false deities of Egypt, He is UNIQUE (Yachid) and He is ONE (Echad). But when people over-emphasize jobs and work, making money, sports, etc.… making them more important than our worship and attention towards Adonai, those “things” become “other gods” Yes, Adonai is a “Jealous” and “Zealous” God! (El Kanah) and has every right to be so.

“THOU SHALT NOT take the name of YHVH thy God in vain” What is that? It is using our LORD’s holy name in unholy ways, in unholy conversations, making promises using God’s name, like “I swear to God that I’ll…” and then, not fulfilling those promises. We should use HIS HOLY NAME in worship and praise only.

“KEEP (guard) the Sabbath Day to keep it Holy” Where are we on the sabbath day? We should be in God’s House to worship, praise, and learn from his word through teachers of the Word. It is a time of rest, and relaxation, a time for family to get together and worship the LORD, even for the house-wives, turn off the ovens and husbands, take them out to eat, or just whip up some sandwiches.

Enjoy the Sabbath day, it is the LORD’s to rejoice and relax in. The Sabbath day has always been Saturday, it was never changed to Sunday (this will probably create some comments). But EVERY day of the week is a time to study God’s Word and praise Him for all of his blessings.

“HONOR Thy Father and Thy Mother” goes without explanation. I think it is common sense for children to honor and obey their parents, for they are the ones who raise them up. Yet the Fathers and Mothers have a GREAT responsibility, to raise them in the knowledge of God and his word. If not, then, they will be responsible for possible “rebels” later on in life.

“THOU shalt not kill; THOU shalt not commit adultery; THOU shalt not steal”. Ever wonder why these are listed together? Example, if one commits adultery, takes the wife of another in sex, that person is “killing” that relationship and is “stealing” what does not belong to him. The word “Kill” means “murder” taking an innocent life, it does NOT refer to self-defense or soldiers fighting in a war. There are many ways of “stealing” some rabbis say that “all sins” are a form of “stealing” not just taking money, coming back late from lunch break is “stealing” time from your employer, telling a lie is “stealing” the confidence one might have had in you, and it is “murdering” that trust.

“THOU shalt not bear false witness against thy neighbor” being truthful to someone is very important, and not telling the whole truth, is in fact, telling a lie, and being false to someone who is close to you, again, it is “stealing trust” and “murdering a relationship” through being “false”.

‘THOU shalt not covet” If Adonai wants you to have what your neighbor has, He will give it to you. We should be content with the much or the little we have, anyway, when we die, ALL will be left behind. So, no need to covet, it just brings about headaches.

(6) This chapter has the “Shema” one of the most important verses in the Torah; “Shema Israel, YHVH Eloheinu, YHVH Echad” “Shema” (Listen to and heed/do/obey) “Yisrael” we are part of HIS people. It started out as 12 tribes, sons of Jacob, then it included those Egyptians who chose to follow Moshe out of Egypt. Adonai did not reject them just because they were Egyptians, they also became part of the nation, through “adoption”.

In the beginning, America consisted of only the indigenous tribes that came from Asia during the Ice Age, but later, European peoples came as immigrants and settlers, when it became a nation in 1776, the United States of America consisted of ALL peoples who were living in the land. The 12 tribes of Israel became a great “Adat” (congregation, community) now consisting of all believers in Yeshua.

we have been adopted into HIS Chosen family through Yeshua HaMashiach, it pertains to ALL believers. Adonai is OUR GOD since we are FAMILY, and He is ONE in Unity (Father, Son, Spirit “Echad” the word for “Adonai Eloheinu” consists of the most sacred letters YHVH, in the ancient Hebrew, those letters symbolize “Behold the hand, Behold the nail”. So, if we looked at the words “YHVH Eloheinu” from an ancient Hebraic position, we could read; “Behold the hand, Behold the nail, who is G-d that instructs (us) and leads us to (eternal) life through the nail that (penetrated) the hand” I guess that is one way one could look at it.

The word “Elohim” has three meanings; One is the Tri-unity of G-d, yet if we spell it “elohim” with a small “e” in English, then it means “gods” in the plural (usually false gods) yet it also means “ambassadors” or “representatives” of “Adonai-Elohim” Remember that Yeshua, when He addressed the Prushim (Pharisees) said, “No ye not that ye are gods?” (John 10:34; Psalm 82:6)

“You shall love…” (vs 5) Yes, with all of our heart, soul, mind, and strength. This includes “teaching” His word to our children, at all times, to others who have the ears and willingness to listen. Be the person in our house, Be the person “walking with us on the “way” at bedtime and at morning time, the time for God’s Word and teaching it is at ALL TIMES, provided of course that the other person wished to hear it. God’s Word is to be shared and taught, NEVER to be forced upon another!

Binding upon the hands and frontlets between our eyes, using Tefillin are symbolic in that God’s Word is to be in our minds and put into action using our hands, in performing mitzvoth (good works).

Moshe reminds the people again and again to “Keep the commandments of the LORD thy God and his testimonies and statutes” in many verses. Just keep in mind that “keeping the commandments does not “save a soul” Salvation comes only from accepting Yeshua (Jesus) as LORD and Savior, that and that ONLY saves a person from eternal condemnation. Obedience to the commandments comes “after” as a sign that we are now part of HIS family, and we now have new desires to follow HIM in HIS ways. There is “Yeshuah Kadosh” (Righteous Salvation) and “Mitzvoth Kadoshim” (righteous works) both are separate yet both go together. The latter is a result of the first.

Oh, final thought. Did Moses ever make it into the Promised Land? One might say "Yes, he did" but he had to "wait a while." Remember on the Mt. of Transfiguration, when Yeshua was surrounded by a bright cloud, and he was talking to Moses and Eliyahu. Moses represented the Torah, Elijah represented the Prophets, and Yeshua, the New Covenant. We can only imagine what they talked about, probably about their prophecies about Him which came true. So, Moses made it in, after a 1500-year wait.

Fellowship at a local church in El Salvador (2016) Great memories 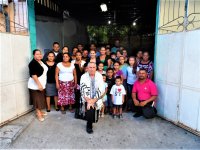