Why are Christians embracing Evolution?

Rebel for truth said:
Biblically: in the beginning God created the "heavens" - God said let there be "light" Genesis 1:3 the first day
Scientifically: according to Einstein before the big bang there was "nothing" - the big bang singularity occurred and there was a burst of "light" ...
Click to expand...

You are not justified in listing supposed similarities and not assessing the dramatic differences.

At no time did I say science was correct.
Click to expand...

I'm making a semantic point in response to this statement for a good reason. Science is a process of throwing out untenable ideas. Your statement implies that some group — ie, Darwinists — has a controlling stake in what science is.

Clete said:
What is it around here that makes people think I'm being hostile[?]
Click to expand...

It's all the things you say that are true.

If I'm being hostile, you'll know it.
Click to expand...

Rebel for truth said:
This is a very old thread but maybe someone will read it.

No one knows the process God used. And because evolution and creation does coincide with each other: first the heavens (big bang) - then the Earth - then the plants - then marine life - then land animals - lastly man. The only difference is in science says this sun was first, in scripture the sun was created on the 4th day. Scientifically, the Earth and the sun are roughly the same age a billion years apart by their estimation. That is probably a reason why some Christians think God use the process of evolution at least in all life on earth except man.
Click to expand...

Rebel's reaction to my post simply baffles me and so I went back and reread this trying to figure out whether I had missed something. It reads the same to me today as it did the first time I read it. I see no way to interpret it other than that Rebel thinks that a marriage between biblical creation and atheistic "science" is possible or at the very least, he thinks its understandable why someone might think so. To which, I say that anyone who thinks such a thing isn't a Christian and might as well throw their bible in a swamp hoping that some microbe might eat it and evolve into something other than a microbe. Even that doesn't really do justice to how far removed such a person would be from reality. It just simply cannot be done without someone lying about something.

Even what Rebel states about evolution and creation coinciding with each other is false...

...because evolution and creation does coincide with each other: first the heavens (big bang) - then the Earth - then the plants - then marine life - then land animals - lastly man.
Click to expand...

God made the Earth on day one and then the Sun and stars on day four.

God not only created the Earth before the Sun and stars, He created it before He created light!

And that just scratches the surface. There just isn't any way to reconcile the biblical record with evolution - period. 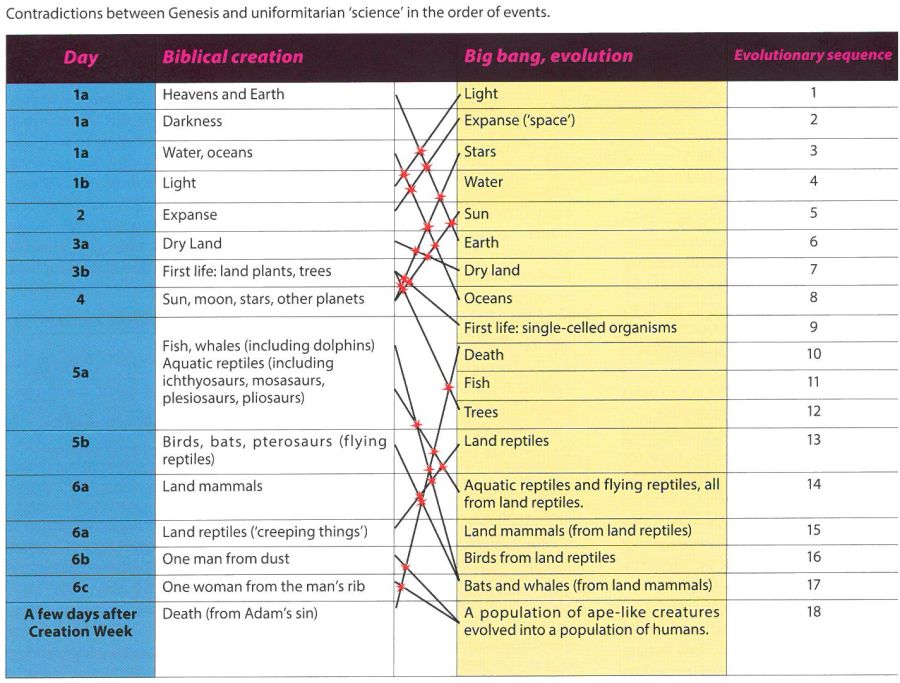 Rebel for truth said:
Anyone ever notice that God called the earth and the waters to bring forth life.
Click to expand...

And that's supposed to support Darwinism how, exactly? How is that supposed to agree with the farce called "universal common ancestry"? Wouldn't you kind of need the waters, alone, to bring forth ALL life.....even all the life that Moses tells us the earth brought forth?

The history of why Christians embraced evolution:

User Name said:
The history of why Christians embraced evolution:

LIFETIME MEMBER
Hall of Fame
The history of why Christians reject Darwinism: "In the beginning, God created the heavens and the Earth..."
H

User Name said:
The history of why Christians embraced evolution:
Click to expand...

It is not the Christians who embrace it.

User Name said:
The history of why Christians embraced evolution:

Presenter gives cartoon version of evolution, but audience accepts it because of confirmation bias.

Darwinism cannot be presented any other way.

They say it themselves: Evolutionists are forced to use a "creationist shorthand" to be part of a comprehensible conversation.

"That is a kind of irrationality that is essential to high-quality work."

Stripe said:
Darwinism cannot be presented any other way.

They say it themselves: Evolutionists are forced to use a "creationist shorthand" to be part of a comprehensible conversation.

"That is a kind of irrationality that is essential to high-quality work."
Click to expand...

LOL, you're right. I guess it could be clarified that the comic nature of different presentations defending common descent is on a sliding scale, with the video from UN being on the "more comical" end of the scale.

LIFETIME MEMBER
Hall of Fame
UN has never posted anything of value in his entire career.

Stripe said:
UN has never posted anything of value in his entire career.
Click to expand...

He's a troll. Nothing more
E

Hobie said:
The questions may be asked, why do many confessed Christians not see a conflict between the work of a Creator God and evolution? Why are they embracing evolution without a second thought?
Click to expand...

1. Because we respect the truth, even if it challenge what we wish were the case
2. Because metaphor can be used to communicate important truths.

Stripe said:
The Bible leaves no room for evolution.
Click to expand...

Nor does any physical evidence, properly understood.

There was one gigantic extinction event, the Flood.

There was one cause of the different geological strata with different creatures characteristically fossilizing in them, also the Flood.

There's zero physical proof of any DNA type changing into another DNA type.

The only evidence that all by itself leaves room for the notion of evolution is the obvious family resemblance between all of life, namely DNA. But when you take away the fanciful ideas that there were multiple gigantic extinction events and extremely old layers of rock formed, there's no reason outside of abject atheism to invent evolution.

The reason why Christians embrace evolution is because they do not understand this.

Stripe said:
The Bible leaves no room for evolution.
Click to expand...